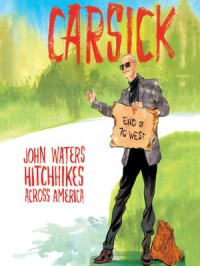 Oh, John Waters.  I really wanted to like this.  The premise sounded cool.  You'd hitchhike from your Baltimore home to your San Francisco apartment and write about the experience.  But I am just disappointed and a little saddened.

The text is divided into three parts.  The first two thirds comprise two "novellas"; "The Best That Could Happen" and "The Worst That Could Happen."  In the former, Waters describes a series of "good rides," while the latter is made up of "bad rides."  The final section, what actually happened, is "real rides."  Waters claims that he composed the first two parts before embarking on the actual journey he recounts in the last section.  I suppose he didn't have faith that his hitchhike would actually provide enough material for a full book, and indeed, I've read reviews suggesting that he should have skipped his "best" and "worst" and simply written a magazine article about his real-rides trip.  I have to say, I agree.

The first section is a self-indulgent exercise in wish fulfillment.  Waters imagines meeting fans and even a not-really-dead deceased former cast member from the Waters canon.  Drug dealers FedEx $5M in cash to him to finance his next movie.  Every man wants him sexually; even the straight men are Waters-sexual.  I'm no prude, but I think I know more about his psycho-sexual landscape than I ever wanted to know.  In the "acknowledgements" section at the very end, Waters notes that one of his assistants mentioned that at times it is difficult to differentiate the "good" rides from the "bad" ones.  I had actually been thinking the same thing.  The primary difference is that there is torture and sadism thrown into the "bad" mix.

Also, as a vegan, I couldn't help being put off by his making one of his villains a self-righteous and hateful vegan who casts him out after feeding him distasteful vegan foods that literally make him sick (from both ends).  And another villain is an animal-rights/rescue person who hates humans.  He even ends up feeling guilty about the latter after meeting a real-life animal-rights couple during his "real rides" journey and discovers (to his shock) that animal-rights people can love animals and people.  Really?  This is news?  Now, one might point out that he even has a villain who is a hetero-hating gay extremist, but this is at least counter-balanced by having awesome gay people in his "good rides" section.  Why couldn't he have had a "good" ride with a vegan who gives him an excellent ride, makes wonderful conversation, and feeds him delicious foods that happen to be free of animal products?  Believe it or not, that is plausible!

Anyway:  the "real rides" section.  Although Waters shares some stories where he genuinely connects with real-life people, far too much of the section features him being whiny.  His motel rooms are not up to his standards.  He has to wait too long for rides to happen.  He's afraid he'll have to sleep in the bushes.  (He brought along cash and credit cards and had decided in advance that he'd stay in motels and even take limousines to lodging if he came up short on rides.)  He ran out of face cream.  His mustache was getting bushy and he didn't have cuticle scissors (eventually remedied during his first-ever, wide-eyed visit to a Wal*Mart).  (Oh, and I now know more than I ever cared to know about the labor involved in maintaining his trademark mustache.)  I also became increasingly annoyed when he did things like throw away underwear.  And just when I started to think he might not even know that washing your undergarments is a thing, he recounted one motel-stay where he did do a load of wash in the on-site laundromat.  Sure, he has a ton of money and can afford to treat his boxers as disposable, but it's just so gratuitously wasteful.

Another thing is just how insular and disconnected he came across.  He was utterly shocked at just how many married, heterosexual men genuinely love their wives.  Really?  BWUH?  He was avoiding chain restaurants, and yet he ate at an Outback Steak, having never heard of such places.  I could go on and on.

I've read reviews that mention that one needs to be a John Waters fan to enjoy this book.  I do consider myself a fan--though admittedly I do find his earliest films somewhat too gross.  Still, this text has overall given me a less favorable view of the author.  Don't get me wrong--I don't think he's a terrible person, but I never would have expected him to come across as so privileged and sheltered.

There were some good moments--hence the two stars instead of one.  However, I can't say I'd recommend this to anyone, unless the premise really, really appeals to you:  One fictional section of wish fulfillment (including sex fantasies), one fictional section of nightmare fulfillment (including rapey stuff and torture), and one "true" section with lots of incredulous "so this is how real people live" reaction.