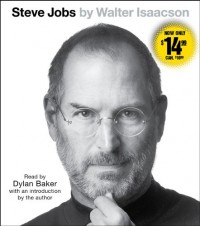 I am not now, nor have I ever been, an Apple fangirl.  I've had some experience using a few different Apple computers for work, but I never fell in love with any of their products nor felt the need to possess one.  By chance an online friend of mine commented about Walter Isaacson's "Steve Jobs" biography, and I was intrigued.  I'd already read and enjoyed iWoz, and I was curious to know more about "the other Steve."

Somehow, my impression of Jobs had been that he had little to do with creating the Apple devices, but he was mostly the marketing wizard with the flashy "unveiling" events. I now know that although he wasn't a programmer or an engineer, he did bring his design vision to the development teams and challenge them to find ways to realize his zen-inspired product designs.  He wasn't easy to work with and he had no tact, but he had a way of getting people to do things they thought were impossible.

Jobs approached Isaacson to do his biography, and for a while, Isaacson resisted because he thought Jobs had way too many years still ahead to start thinking of biographies.  Of course, we know what happened with that line of thought.  Jobs wanted the book to be truthful, even though that meant revealing Jobs's less endearing qualities and more questionable actions.  As Isaacson notes near the end, Jobs "could be an asshole."

Isaacson's research for the book was meticulous, with an impressive number of interviews conducted with people who knew and interacted with Jobs.  As a result, he provides a very balanced, nuanced picture of Signor Jobs.  There were times when I felt he was being a bit repetitious, and some of the anecdotes were soooo detailed.  However, toward the end, it occurred to me that this book was less your standard biography and more like a course on Steve Jobs.  The repetition was review so we do well on our "Steve Jobs" final exams.

I have a bone to pick about Isaacson's attitude toward veganism.  Yes, it is well known that Jobs was a vegan.  But he wasn't just a vegan.  He had other issues around food, and he had behaviors and attitudes about food that were disordered.  He'd go through periods of time where he'd eat nothing but carrots, or he'd be fruitarian, and he'd do fasts and purges.  Yes,  vegans can have eating disorders, and it is known that people with EDs may use being vegan as a way to mask their disorder.  However, being vegan is not, in and of itself, an eating disorder.  Often, when Isaacson made references to Jobs being vegan, he framed this as a sign of his rigidity.  And he even commented that the food at Jobs's wedding reception was "not satisfying" because it was vegan.  Newsflash:  satisfying, appetizing vegan food exists.  Isaacson should look into it.  You know, as research.  Then he can learn about vegan athletes such as Scott Jurek (ultramarathoner), Rich Roll (ultra-triathlete), Brendan Brazier (Ironman triathlete), and Robert Cheeke (body builder), and marvel at how weak they are not.

There are people who are certain that Jobs's dietary choices caused his cancer, while others maintain that they prolonged his life.  I won't pretend to know the answer on that one.  He died from his cancer, and he died too young, but as Isaacson intimates, he made a contribution in the realm of merging technology with art/design/humanities.