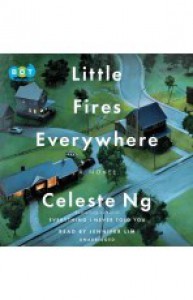 I finished this book today, and now I miss it.

Shaker Heights is an affluent, progressive planned community in the suburbs of Cleveland, Ohio.  Elena Richardson is third-generation Shaker Heights, and it's no mistake that the Richardsons are a prominent family in the neighborhood.  Elena married her college sweetheart, Bill Richardson, who became a well-paid attorney, established her own career as a local newspaper reporter, and had five children:  Lexie, Trip, Moodie, and Izzy.

The Richardsons also own a rental property--a duplex in their community, inherited from Elena's family.  Elena feels she does good by keeping the rent low ($300/month for each apartment) and renting to people she considers deserving.  The bottom unit has been rented for a long time to Mr. Yang, a reliable tenant.  The upper unit has had more turnover, but Elena believes she has found tenants who will grow roots there:  photographer Mia Warren and her teenage daughter Pearl.

Pearl soon becomes friends with Moody, who is in her grade, and before long, she is a fixture in the Richardson house.  Mia becomes a presence there, too, when Elena hires her to do housekeeping and cooking.  Izzy, the youngest Richardson and black sheep of the family, convinces Mia to allow her to be an unpaid photographic assistant.

Everything changes when Linda and Mark McCollough, friends of the Richardsons, are going through the process of adopting a Chinese baby whose mother had left her at a fire station.  From Izzy's description of the situation, Mia quickly realizes that the desperate, depressed mother who left the baby at the fire station is Bebe Chow, who works at a Chinese restaurant where Mia has a part-time job.  Mia tells Bebe about the Richardsons, and soon the matter is covered by the local press, and a case in family court ensues.

Enraged that Mia dared disrupt her friends' happiness, Elena begins to use her reporter skills and connections to delve into Mia's past and dig into some mysteries.  Why were Mia and Pearl (as an infant) the subject of a photograph by the famous photographer Paula Hawthorne, which happens to be in the local art museum?  What happened to Pearl's father?  Why has Mia been so nomadic?

The title of the book refers to an incident described at the beginning of the book, from which the narrative backtracks and then returns.  Someone has set a series of fires in the Richardson house, leaving "little fires everywhere," including on each bed.  Who did this, and why?  Everyone seems to be assuming it was Izzy, who seems to have disappeared.  Are they right?  And if so, why would she do such a thing?

This book was written in such a compelling voice, with a third-person omniscient narrative that was never clunky.  It explored issues of conformity, individuality, identity, morality, and the meaning of motherhood.  Set in 1997 and 1998, when the author was a a teenager, the book also takes on race, class, and gender, along with their complexities.