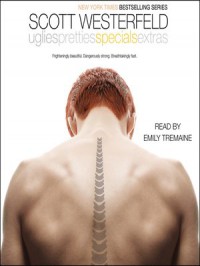 2.5 stars on Booklikes; rounded down to 2 stars on Goodreads.

I will be writing one big review for the entire series once I've finished Extras, which I started just this morning (January 3, 2020).  Although I've shelved the audio versions for all the books, I've actually been going back and forth between audio and text.  I actually ended up reading MOST of Specials in print.  I noticed that the edition I read identifies Specials as "The final volume in the highly acclaimed UGLIES trilogy," while the cover of Extras has "The thrilling fourth book in the UGLIES series."  So clearly, after publishing Specials, Westerfeld decided he was not done, after all.

My ratings for the first two books were 3.5 and 3, respectively.  So this book has been relatively....  Disappointing.  Tally becomes downright loathsome, and although we understand why she does, it doesn't make being in her head any more pleasant.

Icy is the new bubbly.

If you've read Pretties, you got used to seeing or hearing the word "bubbly" almost constantly.  For Specials, it's all about being "icy."  "It's like being bubbly, but much better," says Tally.

Remember at the end of Pretties, Shay and her weird little clique are revealed to be cutters, trying to keep themselves "bubbly" by cutting?  Well, not only has no grown-up intervened to get these misguided teenagers to stop it, this clique is elevated in Specials, with their self-harm tacitly encouraged.  Although the practice is eventually called out (somewhat), I kept thinking this was irresponsible.

I won't spoil the end, but it left me dissatisfied.  And wishing another character had been the protagonist.