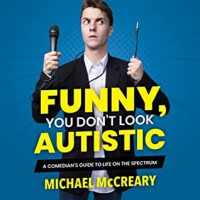 At the tender age of 22, comedian Michael McCreary wrote this memoir with the dual goals of helping neurotypical readers/listeners understand people on the spectrum and to help people on the spectrum navigate the NT world and feel less alone--and all with humor. McCreary shares his family/school/camp/job experiences, as well as his early attraction to performance and stand-up (the latter which he began to pursue in his teens). Along the way, he also pokes at certain stereotypes ("I'm very bad at math"; "I know nothing about computers, which is weird, because I thought we were supposed to be good at this computer stuff and … I think I’ll just phone a tech."

The book is a quick and enjoyable read/listen, and I recommend it to anyone who wishes to gain a better understanding of ASD, or at least one comedian's experiences with it.