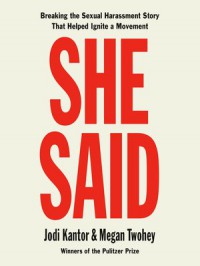 Having read Ronan Farrow's Catch and Kill: Lies, Spies, and a Conspiracy to Protect Predators , much of the ground Kantor and Twohey cover was familiar to me. As the authors describe, victims of Harvey Weinstein willing to speak about his sexual harassment and abuse were difficult to find, as many had signed settlement agreements that required their silence.

Once Weinstein and his legal team become aware that The New York Times plans to run a story on the women who reportedly experienced harassment by the Miramax producer, they attempt to stonewall and delay.

The book also covers Christine Blasey-Ford's path to testifying in the Brett Kavanaugh confirmation hearings. While I had been aware that she was a reluctant witness, I had not known just how much of an emotional toll the experience was to take on her. At the outset, she had been dead-set against traveling to Washington, DC for the hearings, let alone testifying in public.

The epilogue features of gathering of the authors and various women who had come forward to speak out against harassment and abuse, including Gwyneth Paltrow, Ashley Judd, Christine Blasey-Ford, and others. It ends on an uplifting note. Recommended.
audiobook nonfiction
Tweet