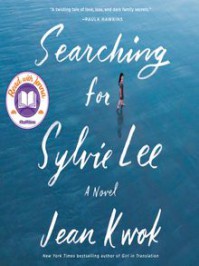 Sylvie Lee spent the first nine years of her life in the Netherlands, with Helena (a distant cousin of Sylvie's mother), Willem (Helena's husband), Lukas (Helena and Willem's son), and Sylvie's maternal grandmother. Sylvie's parents had migrated from China to Queens, New York and struggled to establish themselves. When Sylvie was brought back to New York, she had a two-year-old sister Amy.

Sylvie travels back to the Netherlands upon learning that her grandmother is terminally ill. And while she is there, Sylvie disappears.

Amy, who has always lived in the shadow of her accomplished older sister, follows after Sylvie, determined to discover what has happened to her. She soon becomes enmeshed in confusing family entanglements and long-held secrets.

The book had its share of red herrings, and I did not predict the resolution that ultimately emerged.

I appreciated the complexity of the family relationships, including some tragic mutual misunderstandings.